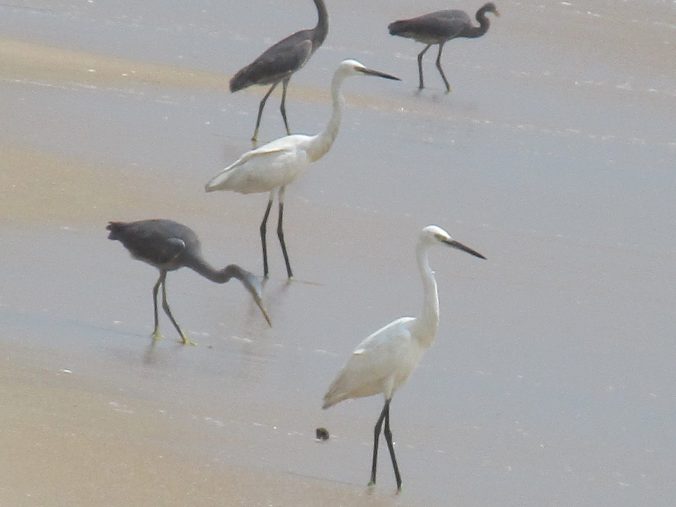 The gangsters on the shore are the crows.
They fly low over our heads, almost scraping our scalps, then scatter the sandpipers. They threaten the egrets – but the egrets look down their elegant necks with disdain and refuse to shift from their twiggy legs. They are too cool for the bully boys.

The sandpipers are the infants on this watery playground. They squeal in high-pitched voices when the crows move in.
And when the waves roll in, they pipe in fear, only to lift effortlessly into the air and fly out low over the sea – tipping sideways with clockwork wings. Or their legs, running double-speed like weaving machines, fly up the sandbank away from the spume.
The thrill of the tide. 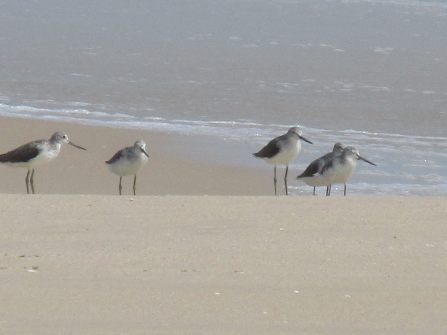 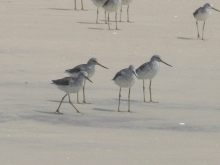 The crows, the sandpipers and the egrets stand on the shoreline and wait for the sea to reveal – just for a few seconds – the wormholes.

Back at the beach bungalow, our very own Mr Twit (Mr Joseph in reality) takes his catapult and aims at the crows in his sand garden. They lift, and fly, and settle on a tree just outside the fence. They watch Mr Joseph with a beady eye.
When he’s gone, they’ll swoop down into the compound again – and drop a well-placed bomb right in the eye of an unsuspecting tourist enjoying the hammock.

The crows cackle as if sharing a private joke; They may be ugly, but they’re not stupid.