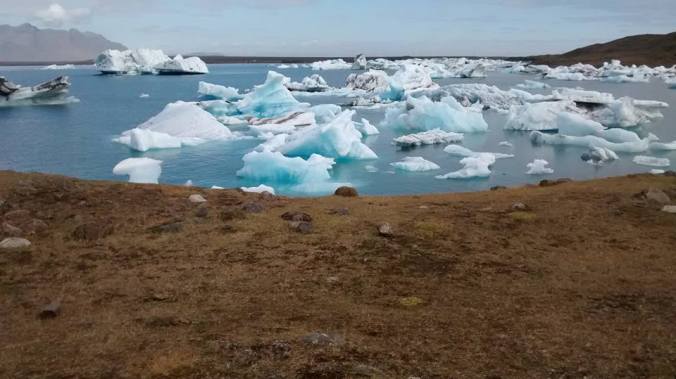 On the shore you reached down and picked up a shard of ice.

You cupped it in your hand as if holding a holy relic and lowered your voice in reverence:
This ice is hundreds of years old,
maybe, even thousands.

You squeezed your fingers tight together, but the ice was losing its form;
its very existence.
Now a clear pebble;
Now softening.
Now dissolving.

The liquid ran through your fingers, dripped to the yellowed grass and soaked into the earth. A pool of water gathered in your cupped hands. You bent down and drank  it, feeling the chilled liquid run through your gullet and settle in your gut.

Then straightened and smiled:
One of the oldest drink I’ve ever had. 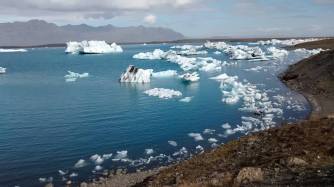 These are the colours of Jökulsárlón:

We’d parked the camper in a basalt gravel pit below the dyke and walked, half-ran up the rise. We’d travelled over 200 kilometres and a morning to see this place. And now here it was.

Beneath the skyline, Vatnajökull was spread across the southeast side of the island like cake-icing; the glacier below it dropping to the lagoon where ice floats sprinkled the sea-water pale hundreds-and-thousands.

I’d seen these scenes miles high in the sky as we’d flown over Greenland and marvelled at the brutality and pureness of nature. But it had looked unreal – a model landscape on the board of Earth.
Now as we inched down the slope of loose stone to the shore, the icebergs were eye-balling us. Close up, they took on the appearance of ice-monsters, all extended jaws and hooked noses, and crabbed claws.

We walked towards the lip of the glacier, aware that Reykjavik was a whole day’s drive away; aware time was trickling away like the splinters of ice washed up on the shore.
Reluctantly, we turned our backs on the lagoon and returned to the camper –  and to the open sea.

From the lagoon, the icebergs are pushed out to the Atlantic. On the shoreline here, we walked across soft sands to the ice floats that lay shored up on the black shingle like glassy whales. Some were mottled and textured while others were smooth and translucent. Here we could touch them and wonder about their fate.

Out to sea, yet more ice floats were tossed and kicked along the surf like a football. I watched one flung to the sky before it was submerged by spume and disappeared from sight. 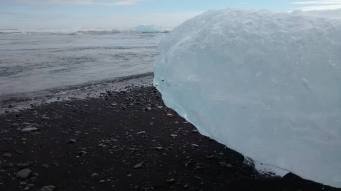 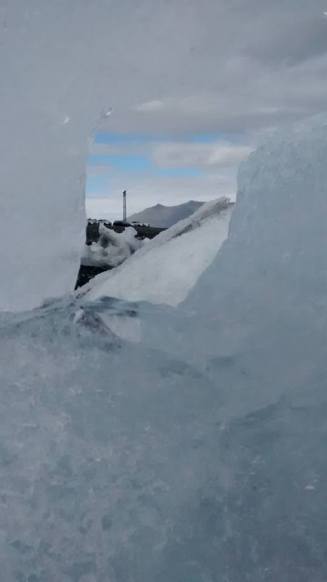